Music in the clouds

Copying files. 5 minutes remaining … Oh did I say 55? Well I meant 30. No hang on 1 hour 10 minutes. Just kidding it is definitely going to take 3 hours to transfer your music. Approximately.

I’m hunched over, gripping my temples in desperation as Microsoft Windows tortuously nudges a lethargic progress bar across my computer screen on a hopeless crusade towards 100%.

It’s a lazy winter Sunday: laundry’s done and legs have been stretched by a swift run. There’s little else to do now but take the bull by the horns and confront an arduous task which I’ve been avoiding for a few weeks now.

Once again it’s time to back up my music library and transfer it to a new computer, a process any music loving techno-dweeb will be familiar with. 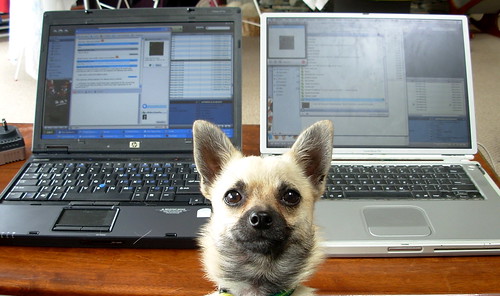 Dog loved to back up his music (photo by wrumsby)

Fastidious is the word

Managing a comprehensive library of digital music is a labour of love, especially if you’re an ardent collector of eclectic music. My iTunes library now spans some 50GB, with over 500 albums and some 11,000 songs. Amongst my peers I’m told that’s a pretty conservative archive too.

Each of those songs must have immaculately intact meta data. Tunes are illustrated with glorious high-resolution artwork and must be correctly categorised within an inch of its genre. I’m not obsessive about this, I just sit somewhere between perpetually discontent perfectionist and rigorously thorough.

It was while watching Microsoft Windows’ bipolar time estimations that the reality of what I was doing dawned on me. It would only take one light-fingered house thief, a well-executed spot of arson or a biblical flood to plunge my aural fixations into a irrecoverable mire of soundless hell. Such catastrophic, albeit melodramatic, events would destroy years of autobiographic music collection.

Slightly less devastating, but still frustrating in its own way, was the realisation that I’m encumbered with a library, the accessibility of which is defined by the amount of portable storage I can afford.

My iPod Touch is fairly new but it restricts me to 30GB of music at any time, that’s enough for anyone you might say. But not when you get a hankering for some bizarre minimalist French electro track or a Simply Red B-side you’ve not heard in two years. Unfortunately my syncing foresight doesn’t extend to predicting musical whims before I leave the house.

There has to be a better way

Apparently there is. Music that exists in a magical place where much of my life already resides: in the cloud.

A friend and fellow muso rang at the weekend to gloat about his new Spotify Premium account:

I don’t have to worry about finding music, downloading torrents and sorting out my library. I just do it all in Spotify. I can even store songs for playing offline when I’ve not got any signal on my iPhone. Do it mate.

I’d normally admonish his smug techno eulogies, but this is the same friend who five years ago insisted I bought an iPod. Having more money than sense at the time I inquisitively purchased a sleek black 5th generation iPod photo. And consequently it changed the way I stored and played music forever. He was right then, so is he right now?

Angels in the clouds

Here’s some heavenly pros of moving to a paid streaming music service like Spotify premium:

* = It’s probably worth mentioning that I have, on occasion, been known to download music from morally reprehensible sources. In my defence it felt like I was sticking one in the eye of monolithic gluttonous record labels by doing that and I always pay to see my favourite artists live when they play local gigs.

In the interest of balance, here’s the side of the argument with the red light saber (cons):

To the lions with it

My comparisons above are by no means exhaustive and suffice to say are only loosely based on a few hours worth of quiet contemplation in the smallest room. This post is simply a reflection of the turbulent contemplation I’m giving the matter.

With those disclaimers comfortably in place I’d like to put it to the community: Are you a user of the Spotify premium service, Last.fm or similar already? What do you make of it? Care to add anything to the pros and cons?